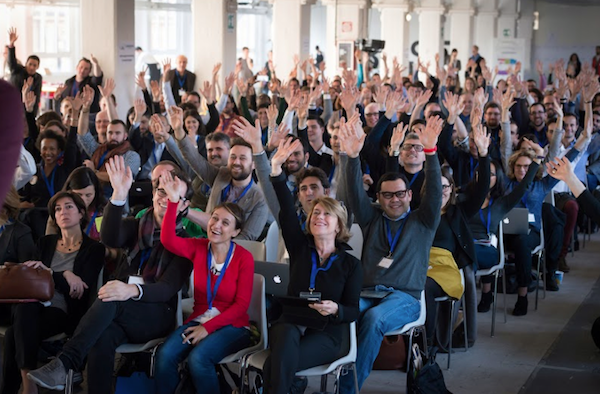 Coworking Grows Up: An interview with Jean-Yves Huwart, founder of Coworking Europe

Coworking Grows Up: An interview with Jean-Yves Huwart, founder of Coworking Europe

Like many of the major players in today’s coworking scene, Jean-Yves Huwart, started off as an unsatisfied employee. Driven by a need for more freedom, Huwart quit his job at a media company and started working as a freelancer. Yet, it didn’t take much more than two weeks before he started to get cabin fever.

At the same time Huwart was going crazy in his home office, there was talk in Brussels about creating one of the first European Hubs, Hub Brussels, which launched in 2009. Huwart was one of the first members to join the space and he quickly realized that coworking was the epitome of what he had been writing about as a business journalist. For him, this budding movement met the requirements of the rapidly transforming modern workforce and was much more than just a fad.

Hi Jean-Yves, what initially pushed you to start the first Coworking Europe Conference?

Jean-Yves Huwart: While I was working at Hub Brussels I was witnessing, first hand, a growing need for shared workspaces that prioritized human interaction over production. I started looking elsewhere for similar spaces to the Hub, and I quickly figured out that coworking was a growing phenomenon that could be found all over Europe. This was the initial inspiration to start the first Coworking conference, and because Brussels is the capital city of Europe, it made sense to identify as a European conference.

When did you have the first event, and what was coworking community like in its early stages?

The first event took place in 2010. We expected around 50 people but instead 150 showed up. At that moment, we understood that something was really cooking. At the time, spaces were still in their nascent stages, Betahaus in Berlin was just one year old, and many of the big names you see in coworking today were just starting out. Because things were still operating on a smaller scale, we were able to easily connect with a lot of people who were developing spaces, and also the individuals who had knowledge about the coworking movement.

What countries, at the time, had the most advanced coworking scene? And how did these developments help develop the Coworking Europe Conference?

In 2010, many of the people we met at the conference came from Germany, which was the most advanced coworking scene at the time. They were already organizing themselves into an association, Coworking Deutschland, which was something that was ahead of its time. After the conference, Coworking Spain started and you also had a strong Italian scene growing.

Because of these coworking associations that were forming, people started looking at ways in which they could come together, thus the people in Berlin invited us to have our conference there for the next year, which was in Betahaus, and Club Office. Then, when we were in Berlin, we met the people from Paris who invited us for the next year and from there we gained more traction and the interested has never stopped growing.

From the first Coworking Europe, a real community was formed, so while the conference is still a yearly event always open to newcomers, it’s also an annual gathering of people who see each other as a family.

As someone who has been there from the very beginning, what are some of the major developments you have seen in the coworking over time?

In a lot of ways we grew up alongside many of today’s more developed coworking spaces, so we have really seen the ways in which the movement has changed over time. We also had the chance to see the way that spaces [have] experimented since the very beginning.

One thing that has changed over time is that coworking operators have learned how to monetize their spaces. Many of the people who attended the first conference were interested in coworking, not so much from a business perspective, but rather as a side project.

Today, the coworking community is playing a major role in how new economies will be structured in the future, as they are paving the way for an innovative workforce.

What are some of the major trends that you see currently in the coworking scene?

This year we had 360 attendees in Milan, which was comprised of experts in the field and also many newcomers. After Milan, we can really say coworking is steadily growing as an industry, which has become more and more mature, while still acting as a source of inspiration for various curators. One thing we’ve seen is that there is a whole new set of players interested in coworking, from government, employees to corporations.

These different sectors are interested in coworking because it is shaping the workspace of the 21st century. They realize that the function of the workplace is changing and that it is more focused on interaction and the human experience. Overall, the sharing economy, co-living, and collaboration are key elements to success in the business world today.

What do coworkers expect today that they didn’t before?

There is certainly more insight available, but what we do see, now more than ever, is that people are interested in growing a business and the proportion of spaces created purely as a social project has decreased. This doesn’t mean that the passion and the ideals have disappeared, but it does mean that coworking is approached in a more mature way. The more the movement grows, the more we understand the economics behind it, such as the importance of having private offices and services, which can generate income.

For example, the initial results of the Global Coworking Survey, which was presented at the conference, showed that more spaces than ever are looking to expand.

We also heard a lot about the emerging trend of coworkcation, what does that say about the way we approach contemporary work styles?

This year’s conference presented more data and hard facts than ever before. We are seeing the rise of different concepts driven by coworking, like “coworkation,” which presents a completely new approach to freelancing. We had several presentations on the topic, from Hubud in Bali and also Neo-Nomad. This increasing global mobility for employees and employers will be a cause a dramatic change in the way we see travel and it will also impact tourist destinations. In the future we could see a significant population of the workforce moving freely and it may eventually be the standard way to make global connections.

In addition to nomadic freelancers, many people are discussing the relationship between coworking and corporations. It has always been a topic, but now we see people developing strategies to make this relationship a reality. Corporations in the future will most likely look like today’s coworking spaces. In many ways, large enterprises need to look towards the coworking model in order to remain relevant in the future.

You also had the first Coworking Africa conference in Cape Town this year. What were some of the most significant takeaways and what did this experience tell you about the global coworking community?

The reaction was very positive. We saw that in the same way that coworking is important in Europe, it is equally, if not more, important in developing countries. For us, basic standards like fast internet in an office space is a commodity, but this not the case in Africa. In the coworking community in Africa, the primary role of the movement is to provide basic infrastructure at an affordable cost. In addition to meeting basic needs, coworking also brings a lot added valued in regards to social engagement, both on a local and global level, in the African community.

What do you predict the future of coworking will look like?

If we keep seeing the value system of the sharing economy as a main force behind the development of new economic models, coworking spaces will be one of the most visible parts of this transformation. The coworking movement will go beyond the conceptual stage and become the physical manifestation of the collaborative economy. While walking through a cityscape, coworking spaces will line the streets, much like factories and offices did in the last industrial boom.

Note: This article was originally posted on Shareable