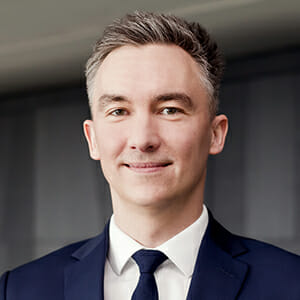 Marcin Juszczyk, Member of the Management Board of Capital Park S.A (Warsaw)

With the Capital Park Group since 2003 and Member of the Management Board of Capital Park S.A. since its inception. In 2004–2005 – the Group’s CFO, since 2005 – the Group’s Chief Investment Officer, and since 2016 – both its CFO and CIO. In 2001–2006 – Chief Financial Officer at Communication One Inc., a group that included Call Center Poland S.A., in charge of mergers, acquisitions and JV transactions. In 1995–1997 – consultant at the business consulting agency Agencja Doradztwa Gospodarczego AM Jesiołowscy, responsible for privatisation projects and company valuations. In 1997–2001 – consultancy project leader at Normax Sp. z o.o. (member of Hogart, an international business consulting group). Graduate of the Kraków University of Economics, majoring in IT and Econometrics. Member of ACCA (Association of Chartered Certified Accountants), an FCCA since 2010.