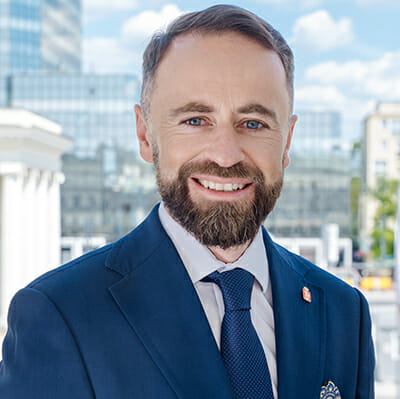 Graduate in Journalism and Political Science at the University of Warsaw. Deputy Mayor of Warsaw since October 2011, earlier – Director of the European Funds Department. As a Deputy Mayor responsible for the development strategy of Warsaw. Supervises European funds, economic development, housing, environmental protection, waste management, and infrastructure.

Started his career in the public administration in 1997 at the Office of the Committee for European Integration, being responsible for strengthening the administrative potential of local authorities for European integration and EU pre-accession and structural funds absorption. After Poland’s accession to the EU, he moved to the Ministry of Economy and Labour, and then to the Ministry of Regional Development, in charge of strengthening the absorption abilities of local authorities in the first program co-funded with structural funds and the Cohesion Fund. For his involvement with activities aimed at enabling the Polish local authorities to use the new chance for their local development, awarded in 2005 with “Local authority serving the society” prize by the main local level corporation in Poland: Association of Polish Cities, Union of Polish Metropolises, Association of Polish Poviats, Union of Polish Towns, Association of Rural Municipalities of the Republic of Poland. As a government expert, also involved with EU-financed cooperation aimed at projects strengthening the local and region al administration in Ukraine, Bulgaria, and Romania.

Employed at the City of Warsaw since 2007, as Director for EU Funds Department and Director of Investment Service Department. In 2011 appointed for the post of Deputy Mayor of Warsaw. Apart from his functions in the City, has also conducted research and teaching activities at public and private universities.

Chair of the Warsaw Council for Innovation Policy and member of a similar body at the region al level. Representing the EUROCITIES association, the network of the largest European cities, at the European Commission High Level Group for Smart Cities.

Also involved with strengthening the cooperation between local authorities at the national level and within metropolitan functional areas. In 2007-2015 Chair of the Committee of EU Policy and International Cooperation of the Association of Polish Cities, since 2012 Co-Chair of Taskforce for Functional City and metropolitan Functional Areas of the Joint Commission of Government and Local Authorities. Actively involved with strengthening the cooperation within the Warsaw metropolitan area, author of several Projects supporting functional links between the communes of the metropolis. Since 2012 Chair of the Steering Committee of Integrated Territorial Investments of the Warsaw Metropolis.

For his input in the development of the local level authorities, awarded by the President of the Republic of Poland with Gold Cross of Merit (2015) and by the Minister of Administration and Digitalization with Medal of Honour for Services for the Territorial Self-Government (2015).