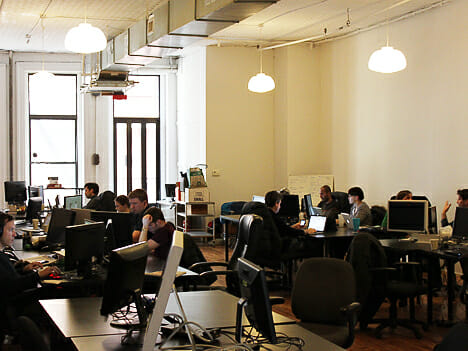 Three years ago, Melissa Mesku had a nascent business and was working from home. Fascinated by the concept of coworking, after her experience living in shared housing cooperatives in the Bay Area, one of which she started herself, Melissa wondered if the alternative kind of ethos of cooperative living could be translated into New York City business sector. Tired of working from home and curious about coworking, Melissa set out to find a coopertive workspace that would suit her needs. Since then, she founded Newworker, once of the biggest coworking magazines following the movement.

We caught up with Melissa to talk about the importance of having a coworking media community, that will “meet the combined needs of the personal and the professional, in order to stay relevant”.

Hi, Melissa. What was your first experience with coworking in NYC?

I visited a couple spaces and they really didn’t appeal to me: Snazzy, expensive places where I never met anyone. Then I found the right spot, a clubhouse sort of place, and I was like, “Hell yeah, I’m home.” In working there I became friends with a lot of people, including Tony Bacigalupo who started the place. In knowing him I got to see what other coworking owners were trying to do and I wanted to help out. All I could really offer, just as a person who coworks, was my perspective as a member.

I didn’t realize how valuable that was, but then I realized there were tons of people like me who are all about coworking even though they don’t own a space, they just worked from one. I connected with some of them and the idea to bring us all together to create something just kind of grew from there. For me, I was slightly obsessed with the possibility that thousands of people who cowork could come together to do something big, like how Ashley Proctor and the Coworking Ontario folks started a healthcare plan for coworkers.

As an enthusiastic coworker you wanted to contribute to the movement you started Newworker.

As I saw it, coming together is the first step, and that if people who coworked realized as I did that there are lots of us who have shared needs and goals, that that possibility might grow from there. A magazine was just one way of doing it; I used to be an editor and knew I could offer that, and honestly I wanted a reason to get back into it anyway. I held a video chat on Google Hangouts for people who wanted to take part. I wondered at a couple points whether it would be worth it – small magazines don’t make any money and they’re a lot of work. But all of a sudden I had submissions rolling in and I was like, well, I guess this is happening! That was three years ago.

What’s your experience now compared to when you started New Worker Magazine?

In the beginning there was just us and Deskmag. Early on, I got a call from a producer at CBS; he said he wanted to interview the head of the biggest coworking publication. I sent the guy to Carsten at Deskmag. Then the guy comes back to me and says, “But Deskmag is in Europe! I need the head of the biggest coworking publication in the United States!” I thought about it for a second and I laughed. “Shit, I guess you’re talking to her.” Now there are a whole bunch and it’s great. Last week I got an email from Ryan at Coworking Insights. He said he wanted to guest write “and of course be the best of friends.” I love it. This movement has come so far and there’s still plenty of room to grow. Bring it on.

What have you learned about the overall movement from the perspective of running New Worker?

That the topic of coworking is just a very small part of what’s interesting to people who cowork. It’s the nexus we’ve formed around, but it’s boring if that’s all we talk about. If coworking spaces arose to meet the combined needs of the personal and the professional, we’ve got to keep that breadth going if we are to stay relevant. Bringing coworking members together is great, but it’s got to be paired with real world value for them if they’re going to take part.

What are some of the major challenges coworking and coworkers face that you have learned about through interviews/stories?

I’ve never been a coworking operator so I’ll just speak to what it’s like for members, at least some of the hundreds I’ve come to know. The biggest challenge is getting their work situation to actually work. A sizable percentage of people who chose coworking work for themselves, and many are relatively new at it. Their challenges are any entrepreneur’s challenges, but they could be either ameliorated or exacerbated by coworking. The coworking gold standard is not just wifi and a desk but also events and community for entrepreneurs. The challenge is that on the one hand you’re totally pumped by your own entrepreneurial fervor and you hear it echoed by people around you, and it’s invigorating, motivating. And on the other hand you’re struggling to keep your head above water, you’re overworked, and even with what the coworking space and your network can provide, you don’t have enough resources to keep it going for long.

In general, it’s not easy. I see a lot of people stick it out for a long time while it’s not working. And then it works out. Or it doesn’t. You don’t know. Insofar as coworking keeps you going and you end up somewhere good, great. But I’d be lying if I didn’t say that I’ve seen some entrepreneurs slog away at it for too long, past the point that their businesses were no longer viable, but they didn’t want to give up on the dream.

The dream is reinforced in coworking spaces, and for those people, that wasn’t necessarily a good thing. Of course, in the end you also come away with a network of people, too, and that alone makes it worth it. The issue is that while coworking spaces lose members to other spaces sometimes, often the reason people leave coworking entirely is that they went back to having a traditional job. It’s an issue, and I don’t know that much can be done about it. The economy will largely be what dictates that one.

On that same note, what can you say about the coworking scene in NYC?

Until a few years ago, NYC had more coworking spaces than anywhere else. A few years ago I naively set out to see them all, but there are so many that it became a Borgesian impossibility. We since launched an interactive map of every real coworking space in the greater NYC area – it’s the most comprehensive and up to date tool of its kind here, and it makes the sheer magnitude of coworking offerings only slightly less impossible to for locals to negotiate. The great thing about having all these spaces here is, from the standpoint of a potential member, I have lots of good choices. This place is sleek; that place has cool people; this place isn’t a place but a community that meets in different restaurants, etc. I’ve always said that if you have multiple spaces to choose from, to treat coworking like Tinder and try ’em all.

Over the years I’ve run into a number of the same people in different spaces here and there. I really got my start at New Work City, the first coworking space in New York. Years in, it turned out it was really true: that anyone who was anyone in the NY tech and startup scene had passed through New Work City’s doors at one time or another. Some of them even went on to run their own spaces. But as for a scene uniting these spaces? I can’t say that there is much of one, though many, many spaces definitely have their own social scene orbiting around them. There’s a lot of potential for these groups to come together, and sometimes they do, but it generally overlaps with or is simply absorbed by the wider tech scene of Silicon Alley.

How do you think that magazines/media can help to grow the movement productively?

Any movement needs a place for dialogue or there won’t be a movement at all. If we don’t continue share stories within our own groups, I guess we’d have to wait for outsiders to tell us what’s going on with us until we were no more. But when ideas are generated internally within a group, they spread easily and become part of who we are individually and collectively. This shared internal discourse authenticates ideas as they pop up, and we find ourselves acting upon them and refining them naturally. When we share what we know, we help each other without even realizing it.

What are some of the things the coworking movement needs to embrace in order to smoothly transition into the future of work?

Coworking started not too long ago and most practitioners have kept fairly close to its origins; most coworking spaces are small community-oriented institutions that are naturally focused on integrating the business and personal needs of their members. At the same time you could also say that coworking – as an industry – is now dominated by major players who have taken the original concept of coworking and turned it into a business above all else. I think it’s natural that those O.G.-style coworking space operators who have kept coworking true to its roots will feel a schism here. I think in time this will continue to grow until the two splinter off from each other, perhaps one carrying the word “coworking” with it and the other adopting another name and perhaps even a different model as things change. 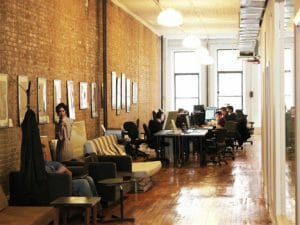 No business model is sustainable anymore. Coworking emerged to meet a need, a need that has grown exponentially, and many have stepped in to bank off that. But the model will shift as people’s needs shift. It’s not that coworking as we know it will look so very different ten years from now – it’s that other institutions that are also experimenting with integrating people’s personal and professional needs will have come up with their own combinations that might end up looking very similar to this one. A childcare facility with space for parents to work next door is not so different from a coworking space with childcare, and we’ve seen such spaces start to bloom all over the world.

How coworking really broke the mold was in normalizing mix-and-match experimentation as a business model for the mobile millennial workforce. Anyone out there experimenting on the bleeding edge of providing people with innovative ways to live better will be following in coworking’s footsteps, and if it’s actual coworking spaces leading the pack, it won’t be the big guys. The big guys aren’t lean, they can’t pivot like small organizations can, and they aren’t in the business of solving a community’s unique needs. The leaders of coworking 1.0 have aced the essence of today’s entrepreneurialism in that they’ve started businesses intimately tied to a specific group of people who identify with them and trust them. Those who know this implicitly are the ones who will be met with success in the future.